Microplastic Contamination in an Urban Estuary: Abundance and Distribution of Microplastics and Fish Larvae in the Douro Estuary 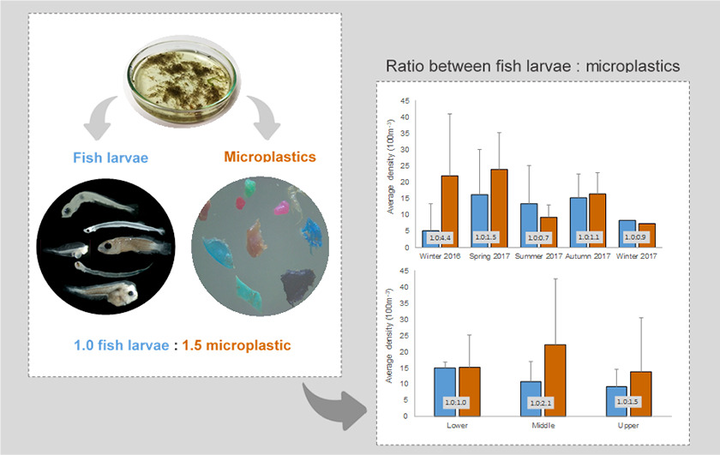 Estuaries are productive environments used by many fish as nursery grounds. The initial stages of fishes are highly vulnerable to (a)biotic factors, and anthropogenic pressures, influencing fish larvae assemblages along the estuary. Microplastics (MPs $<$ 5 mm) are particularly dangerous to early life stages of fishes because their ingestion can induce gut blockage, limiting food intake or exposing organisms to contamination due to MPs capacity to absorb pollutants. Present work aimed to investigate the contamination of an urban impacted estuary (Douro estuary, NW Portugal) by MPs, and study the abundance and distribution of MPs and fish larvae in this estuary. Monthly sampling surveys were performed from December 2016 to December 2017, in nine stations along the estuary. Sub-surface planktonic horizontal trawls were performed to collect fish larvae and MPs. Planktonic samples were sorted, and fish larvae identified. MPs density was determined using a protocol optimized in our laboratory. A total of 1498 fish larvae belonging to 32 taxa were collected, with a mean density of 11.66 fish larvae 100 m-3. During the spring-summer period, it was observed the typical increase in the density and diversity of the larval assemblage. Diversity was generally low, with the high dominance of very few taxa, namely the common goby, Pomatoschistus microps. Different types of MPs were found, namely fibers, soft/hard plastic, colorful/transparent plastic, in a total of 2152 particles, with a mean density of 17.06 MPs 100 m-3. Hard MPs and fibers were the most predominant types, representing 83% of the total MPs collected. In some months the number of MPs surpassed the number of fish larvae, with an average ratio of 1.0 fish larvae:1.5 MPs. Such results are concerning, highlighting that a higher availability of MPs may facilitate their ingestion by fish and therefore increase possible impacts in these communities.